From Valedictorian to Bureau Chief: How Heather Scoffield Shares The News Stories That Matter 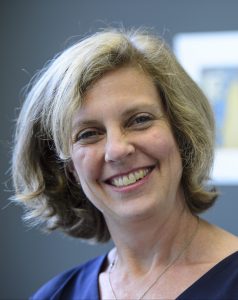 If Heather Scoffield could will one piece of technology into existence, it would be a nifty, multi-purpose gadget for journalists that could simultaneously record video from a distance, record broadcast-quality audio, and transcribe comments.

“In my dreams, this gadget would likely be attached to our heads, recording information on every media platform, leaving our hands and minds free to ask tough questions and engage more meaningfully with the people we are covering,” Scoffield explains. “As it stands now, we carry a video camera, tape recorder, note pad, pen, and tripod.”

Juggling equipment – and coats and boots in winter! – hasn’t slowed Scoffield down. She has spent over twenty years asking tough questions as a journalist focusing on economic and social policy issues. Today, Scoffield is the Ottawa Bureau Chief for the Canadian Press which provides content to over 600 media agencies. Nevertheless, a career in journalism wasn’t always in the cards for Scoffield.

“When I first started at Glendon, I intended to become a diplomat and had no interest in journalism. But during my first year of studies, I had a few things I needed to get off my chest and found that writing for the school paper [Pro Tem] was a logical place to do that. I caught the bug.”

In her fourth year, the foreign service exam was cancelled due to an ongoing recession. In response, Scoffield turned to journalism and never looked back.

During her time at the school, Scoffield’s natural curiosity was nurtured by the classes, environment, and extracurricular activities offered at Glendon. In fact, she credits the school’s unique approach to undergraduate learning with preparing her for her current work.

“Glendon allowed me to indulge my curiosity, and put my thoughts in writing. I was plunged into an environment where no question was inappropriate, and every question was encouraged. Pro Tem satisfied my hunger for a deadline and gave me the taste for chasing news. And studying in French and English prepared me for a life in federal politics, where bilingualism is essential.”

That time spent using Glendon as her training ground paid off. After graduating with a degree in International Studies and giving the valedictorian address for the class of ‘92, Scoffield earned an MA in Journalism from the University of Western Ontario. In 2013, she won a National Newspaper Award – one of many recognitions that have come her way – for coverage of opioid addictions in remote First Nations communities. She highlights this as one of her proudest accomplishments, particularly the feedback she received on her thoughtful treatment of the material.

She also points to her time covering the 2008 financial crisis as an important part of her career due to how quickly events unfolded, the complexity of the material, and the need to rapidly understand and report on the situation. Indeed, she counts this capacity for sorting through the details and telling a clear story among the most important contributions Canadian print and TV journalism make to international news media.

“At a time when social media divides us into small groups that don’t speak to each other, mass media provides an antidote to isolation, fostering a common understanding of our country and our society. We hold politicians to account, without bias or favour, and in language that is accessible to a wide range of Canadians. We also explain and illuminate complex but important issues that matter to everyday lives.”

Another difficulty presented by social media is shortening attention spans and the appetite for clickbait. When asked how she balances the demands of business to expand audiences with the duty to share important stories with the public, Scoffield doesn’t speak of this as a burden. Rather, she positions it as a central part of her work.

“My goal is to make important news compelling enough so that there is no conflict between what people want to read and what they should read. We do that by breaking exclusive news, exposing the underbelly of politics, profiling interesting people and writing in a way that explains to people why politics matters to them.”

Unquestionably, journalism plays a critical, if at times underappreciated, role in our society. But as with many industries today there is noticeable anxiety about the potential threat of new technology to the job security of journalists. For Scoffield, addressing this is all about adapting while staying true to the human core of the work and she gives the following advice to graduates debating a career in the field.