If there’s one mantra that’s made a meaningful difference in Rosemary Sadlier’s life, it’s to “grow where you’re planted”. After graduating from Glendon with a BA in Sociology, she faced a familiar new graduate roadblock: she couldn’t find a job. 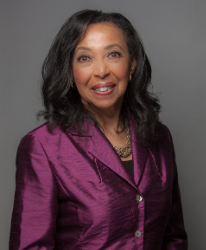 “I volunteered to gain experience while working on contracts or part time, and saved funds to attend a master’s program in social work,” explains Rosemary. “Once equipped with my MSW, I was highly motivated to work in child welfare, however, I could not get into the area I wanted and other areas were slow to open their doors.”

One of those volunteer roles was serving as a board member of the Ontario Black History Society, the only Provincial Heritage Organization (PHO) in Canada that focused on Black history. After a few years, she accepted the position of President. While it was still a voluntary position, she could apply her education to a meaningful cause.

“I was able to put my skills as a sociologist and a social worker to great use for the community,” says Rosemary. “I applied principles and practices from my specialization in sociology, my language training in French, and my social work skills in education, community, and policy to find practical and meaningful ways to build up the organization, ensure more people valued Black History, and secure partners and sponsors.”

Her motivation was deeply personal. Since graduating, she’d married and started building her family. Her struggle finding employment as a Black woman, despite her multiple degrees, was something she didn’t want to pass on to her kids.

“With such beautiful children, how could I not do all that I could to address the barriers that still existed, so they would have a better life?”

“This was important to me, and I believe to the entire country because it created a touchstone to focus on the presence, contribution, and experience of Canadians of African descent – lives that had been overlooked or not included in the national script.”

She was noticed by a publisher during an interview with CityTV, launching a career as an award-winning author, speaker, and consultant. Today, she’s the Founder & President of the Black Canadian Network and serves on the Royal Commonwealth Society of Canada as Equity Lead for the Americas and Caribbean as well as Second Vice Chair. Her current initiative to make August 1 “Emancipation Day” in Canada recently went to a second reading in the House of Commons.

As someone who’s spent the past several decades pushing for positive change in her community and country, Rosemary has the following advice for Glendon graduates who wish to make an impact.

“I would encourage Glendon graduates to get out there, take some action, and try things even if they might not be what you originally had in mind. What you will learn is what you really cannot tolerate, or what you do or do not find inspiring.”