“We are very excited that this year two of the three recipients of the Governor General’s Silver Medal for York are Glendon students,” said Interim Glendon Campus Principal, Ian Roberge. “Teaching and learning go both ways; I know faculty members that have worked closely with these students have learned just as much from them, as they learned from us. Congratulations to Megan and James. Fantastically done.”

During her undergraduate career, Schwegel was involved in the first-year Research Mentorship Program in 2016-17, and facilitated the administration of a psychological test to community members for healthy aging research being conducted by Associate Professor Guy Proulx and postdoctoral visitor Kristoffer Romero. She also volunteered on project with Assistant Professor Laura McKinnon that involved finding nesting sites and recording measurements of eggs in Toronto parks.

Schwegel has been awarded two Natural Sciences and Engineering Research Council of Canada (NSERC) Undergraduate Student Research Awards with Schoof. Research for the first award, held in 2018, involved collecting behavioural data and fecal samples, from which she extracted hormones, from adult female and infant vervet monkeys in Uganda. She is currently holding the second award, for which she has been expanding upon her honours thesis, “Breeding seasonality and stacked reproductive investment in female vervet monkeys at Lake Nabugabo, Uganda,” which used the vervet monkey data to determine how reproductive parameters relate to female dominance rank, and how these parameters differ in this group of monkeys relative to at other locations.

“Receiving the Governor General’s silver medal is a huge honour,” Schwegel said. “As a Glendon student, I was allowed to explore various fields and I’m very grateful for the opportunities with which I have been presented.

“Being at a small campus gave me the confidence to speak up and I am thankful for the friends I have made and the professors who have helped me along the way,” she said. 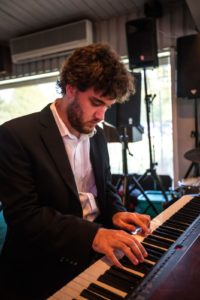 James Addis was a Glendon student who graduated with a major in economics and minors in mathematics and music with a focus on jazz piano. He describes his undergraduate experience at York as “unique and fantastic.”

Addis, who aspires to be a professor of economics and management by day and a jazz pianist by night, is heading into the direct-entry PhD program in Strategic Management at the University of Toronto’s Rotman School of Management.

“It is a great honour to receive this award from York,” he said, “My time at Glendon and in the jazz area of Arts, Media, Performance & Design (AMPD) music has been nothing short of phenomenal.”

For more than 140 years, the Governor General’s Academic Medals have recognized the outstanding scholastic achievements of students in Canada. They are awarded to the student graduating with the highest average from a high school, as well as from approved college or university programs. Pierre Trudeau, Tommy Douglas, Kim Campbell, Robert Bourassa, Robert Stanfield and Gabrielle Roy are just some of the more than 50,000 people who have received the Governor General’s Academic Medal as the start of a life of accomplishment.