Rusul Alrubail, Executive Director at Parkdale Centre for Innovation, is a Glendon alumna (’07) and a former York University staff member, who was selected as one of the recipients of the WXN Canada’s Most Powerful Women: Top 100 Awards for 2020. WXN is a Canadian national organization that celebrates the advancement of women. Launched in 2003, the Canada’s Most Powerful Women: Top 100 Awards celebrate the incredible accomplishments of Canada’s top female executive talent as well as their organizations and networks.

Alrubail’s Parkdale Centre for Innovation is a non-profit incubator that seeks to fill the accessibility and inclusivity gap to innovation, technology and entrepreneurship, especially for underrepresented groups: women of colour, newcomers, and those from low-income backgrounds. She is also a published author, keynote speaker and mother of two. She shares with us insights about her life and what Glendon has brought to her career journey. 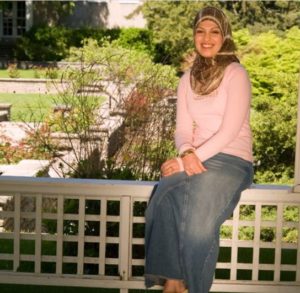 Rusul Alrubail, during her studies at Glendon

Rusul Alrubail: The path that led me to where I am today has been quite unconventional. Come to think of it, even my education at Glendon Campus wasn’t ordinary. I started studying Psychology, and then changed my major to Multidisciplinary Studies, and picked up English as a double major in my final year in 2007.

When I graduated, I worked at York University for about a year in various departments doing administrative work. I then decided to obtain an MA. in Literature, something I was passionate about and also wanted to learn more about. After graduating, I was able to teach at Seneca College on a part-time basis for five years. I loved teaching. When I became a mom, I realized the challenges of making ends meet on a contract basis while still being be an effective teacher.

That is when I delved into entrepreneurship and writing. With my partner, whom I was also lucky to meet at Glendon Campus, we launched a student publishing platform called The Writing Project. TWP empowered students’ voices and helped them become better writers. We delivered talks and met with teachers who were passionate about inclusion and equity for all students, all across Canada.

After a few years of successfully growing TWP, we came to a point of its growth where we needed to expend. We hit many roadblocks in the investment landscape, due to launching an education technology startup. The innovation ecosystem in Toronto was not as inclusive as we would have liked and is one of the reasons we launched Parkdale Centre for Innovation.

The next chapter in my life for the past 5 years has been different. Launching an incubator and accelerator in one of Toronto’s priority neighborhoods has been a challenging journey to say the least. With a lot of what might seem effortless on our social media feeds, comes a great deal of challenges and barriers for us, and for the startups we support.

At the same time, creating an alternative ecosystem that reflects what the future of an inclusive innovation economy here in Canada could look like has been empowering. As an entrepreneur famously said “we no longer need a seat at the table, we are building our own table”.

Career and professional growth can happen in every journey you take. Every road will lead to new discoveries, new challenges, and new learnings. What is really important is that we follow our passions with a purpose. I believe in the importance of remembering our “why” and focusing on doing something that motivates us to wake up every day. That is one of the most empowering things anyone can do for themselves and for others. This is the message I would give to students at Glendon Campus.

View all posts by cbigand