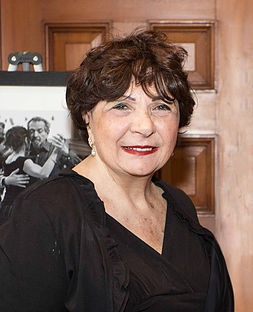 On Thursday, May 24, 2017, the Consul General of Argentina in Toronto, Señora María Amelia Lonardi de Duardo, announced the decoration of Professor Emerita Margarita Feliciano to the Rank of Officer of the Order of May. The announcement was made at a ceremony in the Legislative Building of Ontario at Queen’s Park, on the occasion of the celebration of Argentina’s National Day and of the twenty-fifth anniversary of the creation of the Consulate General of Argentina in Toronto.

The Order of May was created on December 17, 1957, with the purpose of bestowing recognition to foreign civilian or military citizens who distinguished themselves for their services and who deserved the gratitude of the Nation for their outstanding contributions. In a letter to Prof. Feliciano, the Consul General of Argentina states: “It is an honour for me to inform you that the Ministry of Foreign Affairs of Argentina has asked me to bring to your attention that the President of Argentina, Sr. Mauricio Macri, in a Decree bearing his signature, has bestowed upon you the Decoration of the Order of May to the Rank of Officer. In my capacity as Consul General of Argentina in Toronto, I join the celebration of the twenty-fifth anniversary of the existence of the Consular Office in Toronto to the decision taken by my Government to grant you such an important and well-deserved recognition for your outstanding contribution in disseminating our culture. I take this opportunity to express to you my sincerest congratulations”.

In addition to her academic and administrative contributions to York University and to her work as editor, creative writer and literary translator, Margarita Feliciano has been working as a cultural promoter since 1974. Using the vehicle of translation, into and from French, English, Portuguese, Italian and Guarani, she endeavours to create a meaningful and appreciative contact leading to sharing literary, cultural and academic creations among people who live and work in the Americas.

Translating into different languages began with the publication of Indigo Magazine, (1989-1993) and it was followed by the creation of the Cultural Celebration of the Spanish Language, which gave rise to the Festival of Images and Words (1992-), to ANTARES Publishing House of Spanish Culture (2005-) and to SARGASI Publications (2013-). These initiatives have served as a basis for exploring the possibility of widening the realm of linguistic diffusion by translating works originally written in aboriginal languages – such as Quechua, Nahuatl and Ojibway-, thus bringing the beauty inherent in these languages to the appreciation of a world-wide readership.

The work of cultural diffusion on themes related to Argentina stands out with the publication of, Otras Latitudes: Voces argentinas alrededor del Paralelo 49 (2010). This work was translated into English and published under the title of Other Latitudes: Argentinian voices around the 49th Parallel (2013). At present, Margarita Feliciano is working on a book of academic and literary writings titled: Destellos de dos Naciones: Celebrando el Bicentenario de la Independencia de Argentina y el Sisquecentenario del Canadá, which will be translated into English under the title of, Glimpses of two Nations: Celebrating the Bicentennial of the Independence of Argentina and the Sesquicentennial of Canada.

Feliciano’s work has been commended on a number of occasions by the City of Toronto and the Province of Ontario. One of these commendations deals with her contributions as instruments created to “strengthen the social fabric of Canada through the Festival of Images and Words”.