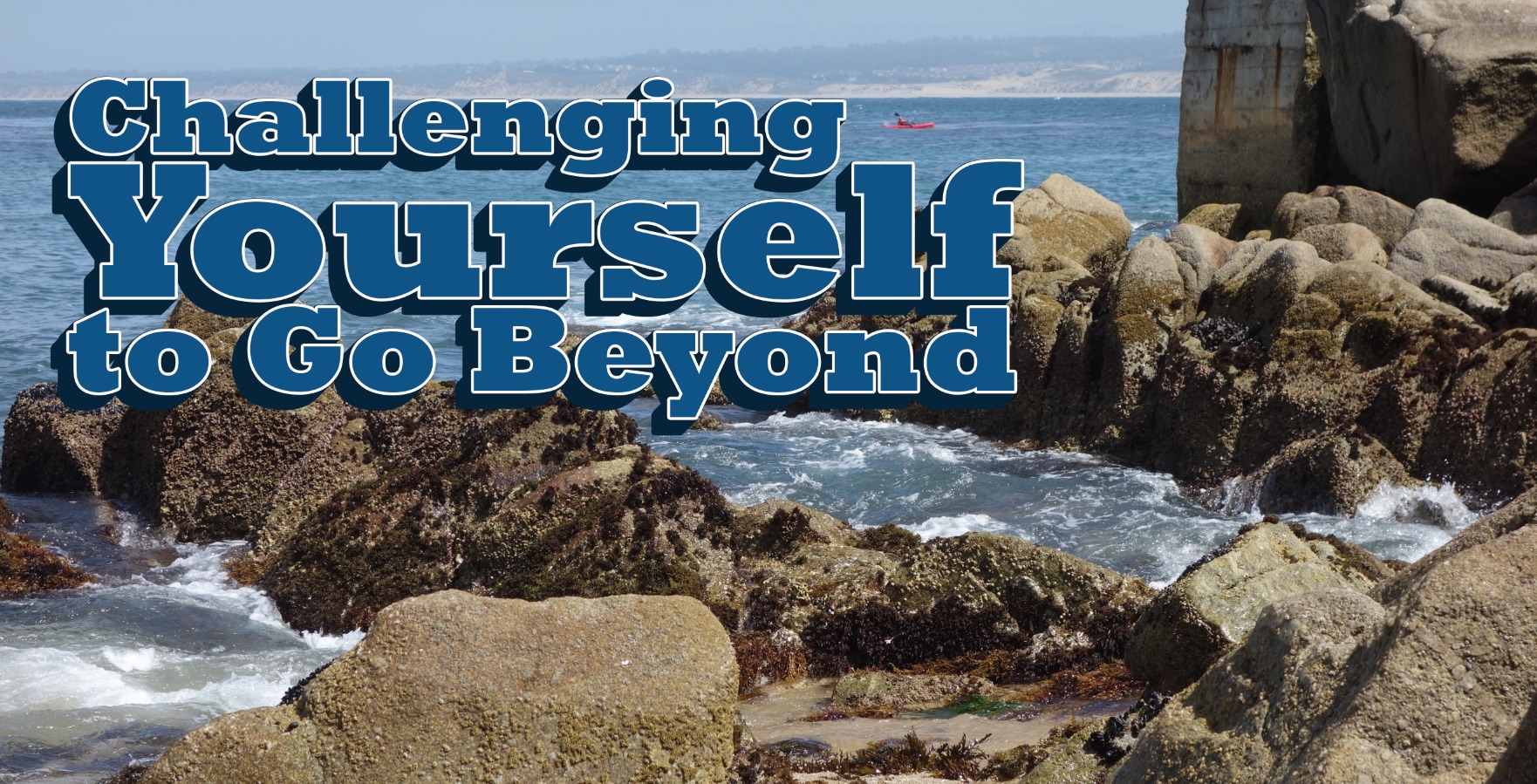 What do you do to stay at the top of your game?

The opportunities for doing so have not traditionally been frequent. Thankfully, this is starting to change. Journals like The Interpreter and Translator Trainer, and AIIC Training of Trainers sessions like this one by Andy Gillies are helping our field to consolidate what we know about interpreter training. 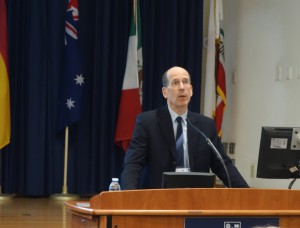 It was hard not to “geek out” while listening to Daniel Gile give the keynote.

For me, one of my touchstones is the Middlebury Institute of International Studies in Monterey, California. I find that, across the board, the colleagues there are approaching interpreter training in novel and innovative ways. So when I was given the opportunity to present a paper at the 4th Monterey Forum with my MCI colleague, Qjinti Oblitas, I jumped at the chance.

Qjinti and I learned a great deal at the forum. In fact, every time someone spoke about an interesting idea, the two of us would look at one another and say, “We should do that at Glendon”. But there were so many good ideas that we repeated this refrain like a broken record. It became a bit of a running gag.

In short, it’s hard to whittle down all we took in to just a few short points here. But I am going to try regardless. Here’s my list of the “Top Three” compelling ideas I encountered at the Monterey Forum. 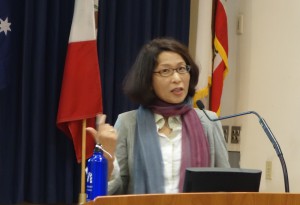 1. Build a Culture of Interpreting

How do you drive a pool of talented candidates to a demanding, graduate-level interpreter training program? By creating a culture that interests undergraduates in interpreting as a profession. This was the message we heard from Dr. Kayoko Takeda. She and her colleagues at Rikkyo University in Tokyo, Japan, set out to encourage “Translation and Interpreting Literacy” among undergraduate students through the creation of a special course. 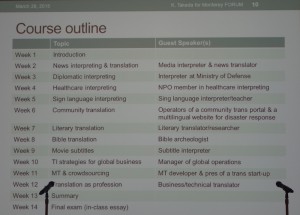 Now, I have certainly heard of this approach being used elsewhere. I can think of other universities that have tried to offer an introductory course in  undergrad programs to stimulate interest in graduate interpreting programs. It hasn’t always worked.

So what makes Kayoko’s course different? Two things. First, students get to survey a broad range of topics in a short period of time. They get the message that translation and interpreting can lead to any number of interesting career paths. Second, they get to meet an array of real, live professionals who are actively engaged in those paths. In other words, translation and interpreting are presented as multifaceted and real activities that allow different kinds of people to earn a good living. Those are pretty compelling arguments! 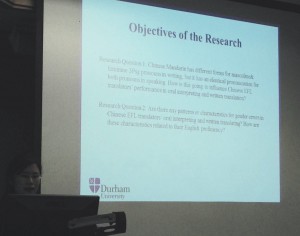 2. Look Below the Surface

PhD student, Hao Zhou, of Durham University, gave an interesting talk on interference between English and Chinese. She noted that Chinese speakers don’t always distinguish between “he” and “she” in English. This is because, in spoken Chinese, the word “tā” is used for both “he” and “she”. A distinction is made in written Chinese (他 for “he” and 她 for “she”, although I understand that even this distinction entered Chinese writing only somewhat recently).

When I work with my Mandarin-speaking students, I am certainly aware that basic issues with English grammar creep into their English interpretations. Indeed, I have heard my students make errors with “he” and “she” on a regular basis.

So during the coffee break, I struck up a conversation with MIIS associate professor Laura Burian. Laura is an English A interpreter who works in the Mandarin booth (no mean feat!), and I find she always has creative solutions to problems in the classroom. I asked her how she gets her Mandarin-speaking students to move beyond the grammatical mistakes that sometimes plague their performances.

“You have to understand, Andrew,” she explained, “that students aren’t making these mistakes because they don’t know better. They are making them because their minds are busy elsewhere while they are interpreting.” 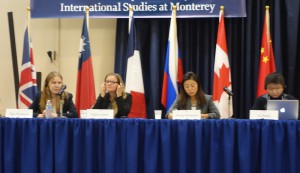 She told me about an exercise she does in class. After her students have interpreted into English, she gives them a sheet with three columns. In the first column, students have to write out a transcription of exactly what they said during their interpretation, grammatical mistakes and all. In the second column, they have to fix their language errors. In the third, they have to outline a strategy they will use in the future to avoid making the mistakes again.

By looking at the second column, Laura can see the source of the error. (If the error is not fixed, there is a problem with the student’s language knowledge. If it is, the student is having trouble juggling cognitive tasks during interpretation.) In the third column, students build a plan to move past their sticking point.

This may mean devoting a set number of hours to practice to help automate the interpreting process, or looking at specific difficulties in a given speech that threw the student off kilter, resulting in the error. The trick is to not assume that the issue on the surface is the actual problem that needs to be addressed. 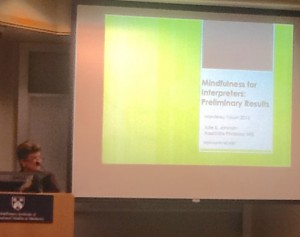 One of the presentations that I enjoyed the most was given by MIIS associate professor Julie Johnson. Julie teaches a course that shows interpreting students how to use mindfulness meditation to manage their stress. It is also the topic of a PhD dissertation that she is working on, and she spoke about her research during the conference.

I was also lucky enough to speak with Julie one on one over lunch, and I got to hear more about what she does with students in the classroom. Readers of this blog might recall that I’ve written about mindfulness before, and I have introduced it a couple of times in my onsite interpretation classes. But what I have done amounts to little more than monkeying around with a few ideas. Julie’s commitment to mindfulness in the classroom is much more serious and well thought out.

“The important thing,” Julie remarked, “is taking students beyond the occasional use of meditation. They need to practice on a regular basis.”

Julie explained how she uses a guided exercise to first get students to recreate an extremely stress-filled mental state by imagining how they will feel the day of a high-stakes assessment, like their exit exams or the accreditation test for a major international organization. Following this, she gets students to observe their emotional state in a mindful way, by observing it “from a distance”, in a dispassionate, non-judmental place.

From there, students practice, over and over, toggling between the two head spaces. As one student put it, “when I’m the dispassionate observer, my feelings still go around and around like they were in a tumble dryer, it’s just that I’m no longer tumbling around in the dryer with them!”

Over time, the toggling becomes easier to do, and almost automatic. As a result, when students actually find themselves in that high-stakes moment, they are better able to toggle, and to step outside of themselves. Their feelings are less likely to get in the way of a good interpreting performance. 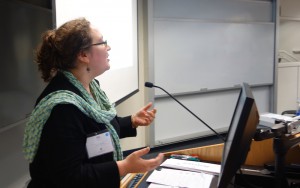 Qjinti talks to the audience about building community in online classes.

Of course, the three points I outlined above are just the tip of the iceberg. One of the keynote speakers was Daniel Gile. (Many of you will be familiar with Gile’s Effort Model. If you’re not, here’s a quick and dirty summary by blogger Alessandra Vita.) It was inspiring and thought-provoking to hear him ask whether what we think we know about conference interpreting isn’t actually in a state of flux.

Also, Qjinti and I were not mere passive observers. We gave a paper that argued — unlike other research on the topic — that student-to-student interactions are actually the most important way of building community in online courses. We described for those assembled the surprising ways in which our Year One students connect with one another across the distances.

All in all, our time at the Monterey Forum was very enriching. I know that both Qjinti and I learned a great deal. We both returned home with a set of fresh ideas that we are eager to incorporate into our teaching at Glendon.

But what about you? When you are ready to take your game to the next level, what do you do? Who do you talk to? Let me know by dropping me a line in the comments field below.


2 responses to “The things they say in Monterey”