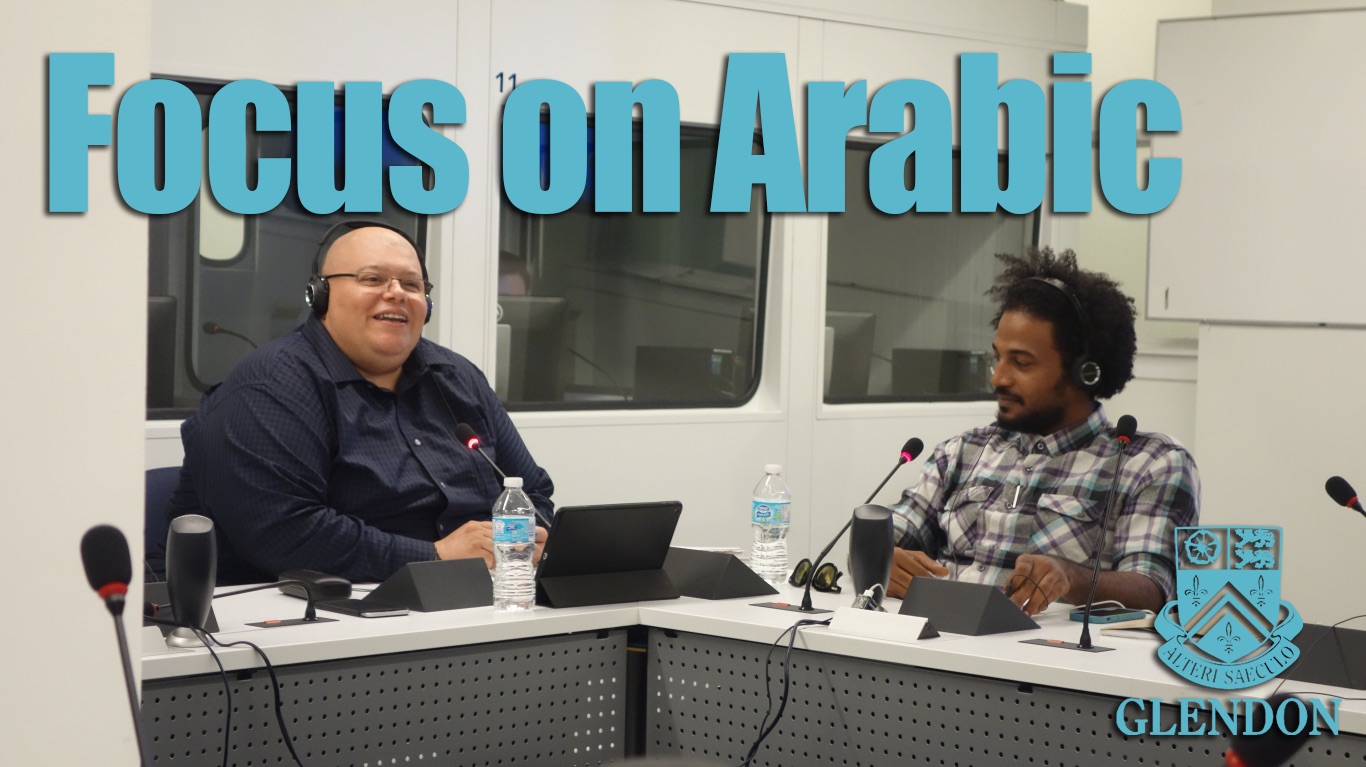 Recently, the MCI held a special event that allowed our Arabic team to shine.

This year, the Toronto International Film Festival (TIFF) featured a short called “The Society“. (You can watch the trailer here.) It was the creation of director Osama Rasheed, and it featured actor Ahmed Moneka. It tells the story of two gay men living in Baghdad, and of the trials and tribulations that Iraqi society imposes upon them.

We were fortunate to host both men at Glendon — Osama via videoconference and Ahmed in person — and to have them participate in a panel discussion. The discussion was moderated by one of our students, and the whole event took place in Arabic. This gave the Arabic team an excellent opportunity to get a lot of practice working into English, and students from our other language teams practiced taking relay. 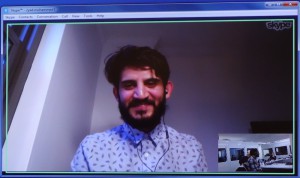 During the discussion, Osama explained his motivation for creating the film, which was shot in Iraq. Since 2003, Iraqi society has fallen in on itself. Different groups of people — Sunnis and Shia, Arabs and Kurds, for example — have become increasingly hostile to one another. The end result is a place where no one is safe, but where minorities and marginalized groups are especially vulnerable. In his films, Osama is interested in shining a light on the plight of these groups, and in making his audiences aware of the horrors that they face. The film was also a way for him to explore other dichotomies. One of the gay men in the film is white. The other black. One is urban. The other rural. In telling the story this way, Osama was able to uncover the tensions and fault lines that are tearing Iraq apart. 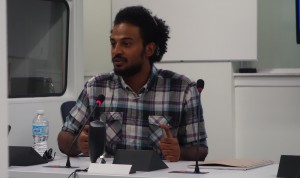 Ahmed’s motivation for acting in the film came from a similar place. A normally upbeat and positive person, he found it increasingly difficult to perform his craft without running afoul of the social and sometimes actual battle lines that criss-cross Iraqi society. Moreover, he knew that things were especially tough for members of the LGBT community in his country. He was willing to appear in the film, even though he knew doing so would be dangerous for him. Like a true artist, he believes in speaking out, and I was struck by his courage. As it turns out, now that the film has been released, there have been threats on his life, and he is seeking protection here in Canada.

When the discussion was in full swing, three things crossed my mind that are worth sharing here. 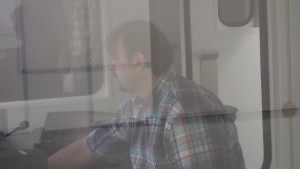 1. This event was entirely organized by students

It was students who suggested the activity, students who contacted our guests, and students who made things run. And it was very successful! As a matter of fact, it might even be a new model for us to follow in the future. Because Glendon is bilingual (English and French), we get a lot of requests for interpreting into and out of French. Sometimes, if leaves the other language teams feeling like they are playing second fiddle. But if they can go out there and line up their own language-specific activities, then it’s a way for them to have every bit as much practice with real clients as their French-language peers. 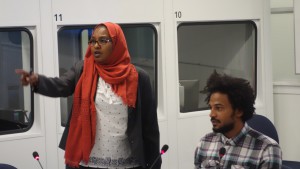 2. Our students are professionals

The subject matter of the film and of the discussion — the LGBT community in Iraq — is not something that all of us are necessarily comfortable talking about. Sometimes, we have personal beliefs that run counter to what’s being said. Other times, we just not used to discussing certain topics, especially in our B languages. (The theme of the panel was certainly unlike any material we use in class.) But our students stepped up to the plate. They prepared for the panel like any other assignment. With glossaries at the ready, they jumped into their work with both feet. If they had any misgivings or lack of comfort with the subject matter, it did not show. 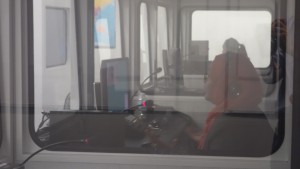 3. I gained new appreciation as a client

Often, when I listen to students interpret, they are working with speech material that is familiar to me. Quantitative easing. Foreign direct investment. UN Millennium Development Goals. These are all things that, for interpreters, become routine. Occasionally, I encounter a less familiar topic (For example, I recall listening to the Arabic team interpret an interview with the leader of the Muslim Brotherhood in Jordan.) But I can always do my homework ahead of time.

Our recent event was different. I couldn’t read up before the start of the panel. And as the conversation intensified, I found myself on the edge of my seat. Ahmed, for example, described his many brushes with death — the sniper bullet that missed his head, the mortar shell that struck the minivan cab he was riding in — that are part of daily life in Baghdad now. With each story, I found myself listening less and less to the quality of the interpreting, and more and more to the content of the tale. I was wrapped up in everything that our guests were recounting, and I needed the interpreters in order to take it all in. I’m glad to say that, thanks to the interpreters, I was able to hang on our guests’ every word.

I’ve spoken before about how our students make the MCI the special place that it is. Well, the calibre of our students was on full display again during this event. I was pleased to see how they took charge of their own development, created their own learning event, and interacted with stakeholders both here in Toronto and elsewhere to make it happen. It was a sight to behold.

Have you got a story about how you grabbed the bull by the horns in your interpreter training? Let me know by using the comments field below.