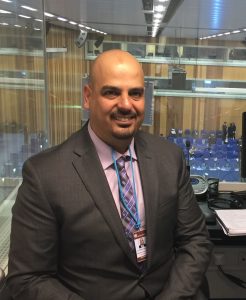 Ahmed Al-Tameemi graduated from the MCI in 2016, with Arabic A, English B. From the start, it was clear to us that Ahmed was headed for success, not only because he possessed the raw talent to become an interpreter, but also because he worked tirelessly to hone his skills over the course of the program. He was very disciplined in the way he approached his interpreting practice, and his determination paid off for him. We sat down recently with Ahmed and asked him to share some of his key learning moments with future MCI students.

You helped coordinate the interpreting team that welcomed the Syrian refugees to Canada. What was that like for you?

It was a defining moment in my life and a landmark in my career as an interpreter when I was chosen to supervise a team of interpreters to interpret for 25,000 Syrian refugees who arrived in Canada. The task required a lot of preparation and hard work. I still remember the moment when the first refugee family arrived and was welcomed by the Canadian Prime Minister Justin Trudeau. I was delighted to interpret for the Prime Minister and the family in question. I realized how important the role of interpreters is and how it can make a difference in the lives of others.

How did the MCI help you get where you are today?

The training I received at the Glendon MCI provided me with the solid foundation for my performance. Equipped with the skills I learned and the professional tips I received from my professors, I have been at the top of my game. In the MCI, I was trained to interpret in a variety of contexts and settings that mimicked the real market. I believe what I learned at Glendon will always support me in my career as an interpreter.

The Exit Exam at the end of Year 2 can be really nerve-wracking. How did you fare?

I passed the Exit Exam on my first attempt. It was both challenging and rewarding. It was challenging because it represents the final step of the program where students are expected to show that they are ready for the market. The Exit Exam was rewarding because it motivated me to practice with a target in mind. It made me understand how I perform under pressure and learn from my mistakes. I believe the best way to pass the Exit Exam is to do daily routines of study and practice. Set a target for each practice. Plan ahead, eat healthy and sleep well.

My dream is to interpret at the UN or any other international organization. Currently, I am preparing for the UN interpreters’ test and further honing my interpreting skills. I always believe that time and hard work are the essential keys to achieving targets.