The 2017 recipient of the York University President’s Research Excellence Award was Professor Anne Russon, from Glendon’s Department of Psychology.  The award was presented on April 4 at the York Research Leaders’ Gala, a star-studded annual event in the research community, showcasing York’s talent by acknowledging researchers and academics who have won major awards, received large grants, made scholarly contributions in the form of published books or achieved research breakthroughs in the previous calendar year – 2016, in this case. 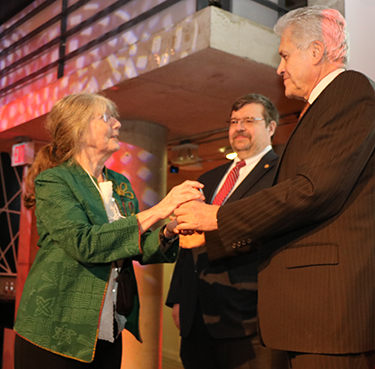 “I am immensely proud that Glendon’s Professor Anne Russon was awarded this distinguished honour,” said Donald Ipperciel, Principal of Glendon.  “The incredible research she continues to do in her field contributes in a pivotal way to York’s standing as a leading research university.”

Russon is a first-rate scholar with a record of research, publication, outreach and leadership sustained over many years. She is internationally recognized for her accomplishments as a behavioural primatologist and leading expert on orangutans. For 30 years, her research has broken new ground on great ape intelligence. Her pioneering work focuses on the way in which great apes use their cognitive abilities to solve problems in their natural habitat, the evolutionary origins of these abilities and their implications for human intelligence, and how they may relate to conservation efforts.

In addition to her role as Executive Director of the Borneo Orangutan Society of Canada, Russon has served as scientific advisor for several orangutan documentaries and orangutan support organizations including:  Alchemy Films, New Zealand Natural History Unit; Borneo Orangutan Survival Foundation, Indonesia; and the Orangutan Conservancy, USA.  Since 2009, she has been studying the behaviour of wild orangutans in Kutai National Park in East Kalimantan, Borneo.

Russon is the author of several popular books dealing with Great Apes including Orangutans:  Wizards of the Rainforest, Reaching into Thought:  The Minds of the Great Apes, and The Evolution of Thought:  Evolution of Great Ape Intelligence.  In 2014, Russon was in a feature article in The New Yorker magazine.

“What this research award means most, to me, is the opportunity to thank York,” said Russon.  “York introduced me to research on great apes during my graduate studies, has provided major support for my orangutan research for over 30 years, and has provided me with the best academic home I could imagine – Glendon Psychology.  My research accomplishments would not have been possible otherwise, so I am very pleased to have the opportunity to thank everyone at York who has helped enable them.”

The President’s Research Excellence Awards honour established, full-time, active faculty members with distinguished scholarly achievements who have had a notable impact on their field(s) and made a significant contribution to advancing the University’s international reputation for research excellence while significantly and positively contributing to one or more aspects of the York community’s intellectual life.