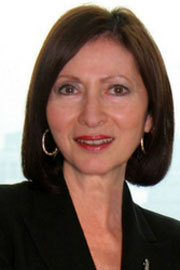 When Dr. Ann Cavoukian received the Meritorious Service Medal, she was especially touched to hear about the vetting process.

“They said I had wonderful responses from people in Canada, but they said the responses I got from people outside of Canada were unbelievable. Off the scale. That’s what warmed my heart.”

Awarded by the Governor General, the medal recognizes individuals whose exceptional deeds bring honour to Canada. Dr. Cavoukian’s work fits the bill. Her career in privacy, most notably her landmark work developing Privacy by Design, has earned her international recognition.

Understanding a topic as complex as privacy requires a deep commitment to learning, and she credits her professors at Glendon with offering exceptional guidance.

“If you showed interest and determination in the studies you were doing, you got what amounted to private tutorials,” Dr. Cavoukian says. “I had the most wonderful professors. I think what I learned more than anything was always delve deep. If you value something, you value understanding it.”

That commitment to learning paid off. In 1997, she was appointed Information and Privacy Commissioner of Ontario, a position she would hold for three terms. Today, she is the Distinguished Expert-in-Residence at the Privacy by Design Centre of Excellence.

Her entry into the commissioner role was unusual in one way: Most commissioners are lawyers. Dr. Cavoukian, who’d earned an MA and PhD since leaving Glendon, was a psychologist. But this allowed her to bring an interesting approach to the role. Such a unique perspective enabled her to come up with her proudest professional accomplishment to date: Privacy by Design.

Privacy by Design is a framework that advocates for privacy to be considered at all stages of the engineering process.

“Regulatory compliance is very important, but that’s always after the fact,” Dr. Cavoukian explains. “It’s after a privacy intrusion has happened or a data breach, and you offer some system of remedy.”

In our hyper-connected world, an ounce of prevention is worth a pound of cure. This belief led her to develop the seven foundational principles of Privacy by Design right at her kitchen table.

These principles, which have been translated into 40 languages, will be included in the law for the very first time when the European Union’s General Data Protection Regulation comes into effect next May.

“It really raises the bar dramatically in terms of how we are going to take privacy seriously.”

Dr. Cavoukian describes herself as “the eternal optimist”. She has little patience for people who think of privacy as fleeting or something we must give up in exchange for security.

“You reject that,” she insists. “We can have both privacy and security. You don’t have to give up one for the other. We need to end the zero-sum mindset of either/or, win/lose. We need to have both. Privacy forms the foundation of our freedom.”