A special thank you message to our community from Ian Roberge. Click the image to view the video. 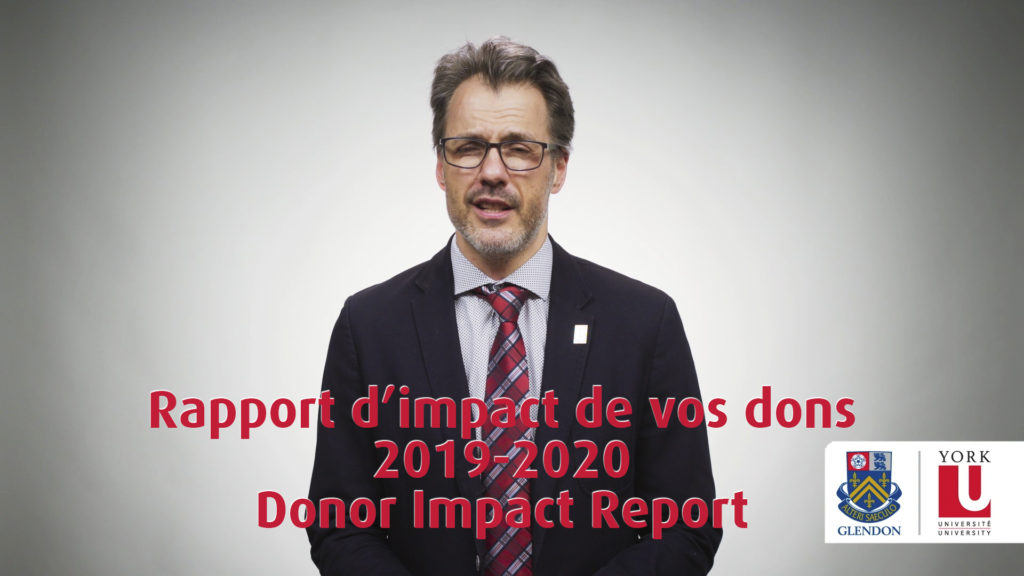 In 2019-2020, we subsidised the Research Apprenticeship Program (RAP), thanks to your generosity. In total, thirty students have participated over the past two years.

RAP is a program targeting first and second-year undergraduate students, members of the « Top Scholars ». Through this initiative, students develop key skills linked to research, applicable to their studies and learn to work more independently. These promising students are paired with Glendon professors to gain essential research skills that prepare them for pursuing graduate studies at top universities and other career paths.

In 2020-2021, the program will be expanded to include third year students, both Top Scholars and non-Top Scholars.

Here’s some feedback from our professors and students: 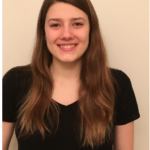 « I had a really positive experience with my mentor. I was nervous entering the program directly from high school but my mentor quickly put me at ease. She was very understanding and was always there to provide advice. What I really enjoyed about the program was that along with the skills I was gaining from the tasks assigned to me, I also had a great resource to consult about the university environment I was learning to navigate ».
Laken Hobson (First year, International Studies) 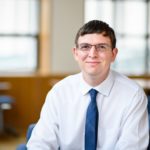 « Participating in the Research Apprenticeship Program as a mentor was a very rewarding experience, and gave me the opportunity to work one-on-one with an outstanding student. I met regularly with her, and this was a chance to give the student a flavor of what research in Political Science is like ».
Professor Dan Berbecel (Political Science)

As detailed in our last Donor Report, we introduced you to four students who received financial aid from Glendon and asked them to share the impact of your donations on their lives. A year later, we asked them to take stock and here is what they had to say.

Since the report was published, Elton Campbell has joined Glendon’s Pro Tem newspaper, serving as a Layout Designer. He is a member of GL Zone, a volunteer-based peer mentorship and community engagement program designed to support student transition and experience, in addition to contributing to the Glendon community at-large. Last summer, Elton participated in the Explore Program. The program is designed to help students gain fluency and become more confident interacting in French or English by developing their conversational skills. He significantly improved his French, which in the process helped him expand his francophone network on campus. Academically, Elton is focused now more than ever. His long-term goal is enrolling and completing a Master’s degree so that he can pursue a career as a research policy analyst.

Maria Moncaleano explains that obtaining her bursary has been critical to her academic success. This allowed her to focus on her studies, which resulted in strong grades. She is an active member of the York University Psychology Club and likes to take advantage of their workshops and academic activities. Maria has her sights set on continuing her studies and finishing her Master’s as a prerequisite to becoming a clinical psychologist. In preparation for her future endeavours, she is working on independent research projects, applying to studentships in the health care sector, and volunteering with charitable organizations that help individuals and families in need. 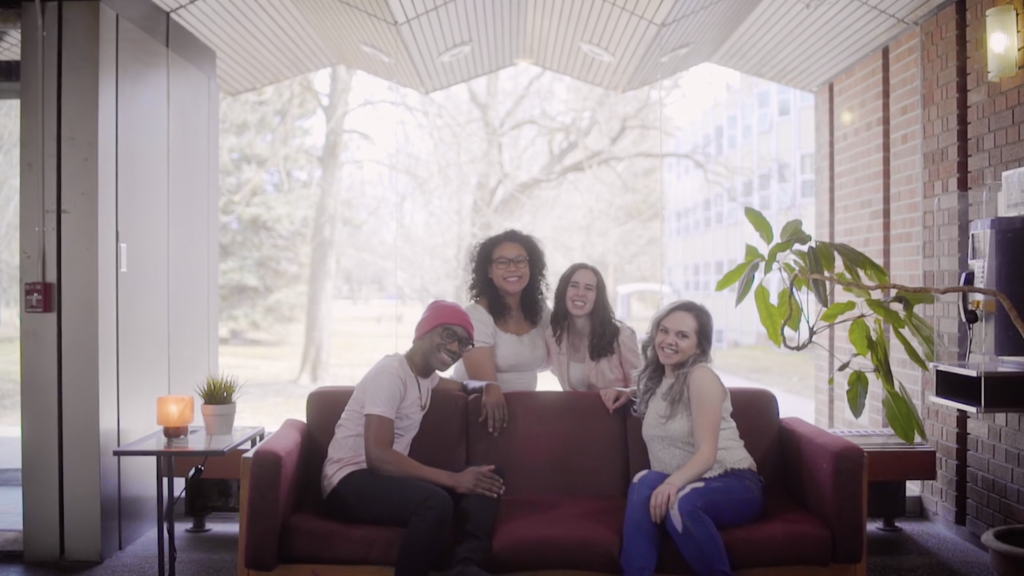 Queianna Park is working full-time in a field that she loves. She has completed all her coursework to graduate and is anxious to cross the stage at a future Glendon convocation. Her passion for dance has led her to choreograph multiple numbers that have been performed at various competitions. Thanks to the generosity of donors she has been able to complete her undergraduate studies and was afforded the opportunity to travel where she was able to expand her academic and artistic opportunities. This year was probably her most successful to date. Recognized for her work, Queianna has had multiple work opportunities due to the success of her contributions. She plans on making it a career and becoming a manager. Staying close to her family is also important and a daily source of support and well-being.

Finally, Andrea Caruso explains that she moved several times in 2019-2020 for academic and professional purposes. Her journey began in Ottawa as an intern at the Centre for Research for International Development (CRDI). From there she spent a semester abroad at the University of Strasbourg in France. Andrea returned to Canada to complete the last semester of her Master’s degree in Public and International Affairs at Glendon where she is also working with Professor Garon as a research assistant. The financial help that she received enabled her to finance her exchange program and improve her French language skills. In the future, she hopes to work in the provincial or federal government as a civil servant.

GRATITUDE FROM OUR STUDENTS

« The ability to stay on residence has allowed me to integrate myself into campus life and connect with faculty on level that would have been difficult due to commuting circumstances. Your generosity not only helps to fund my aspirations, but it helps by allowing me to be a part of a loving community that has helped to find the best within me. I will forever be grateful for this award and cherish this for helping me be a part of the community and succeed ». Eranga Wikramanayake, Friends of Glendon Bursary 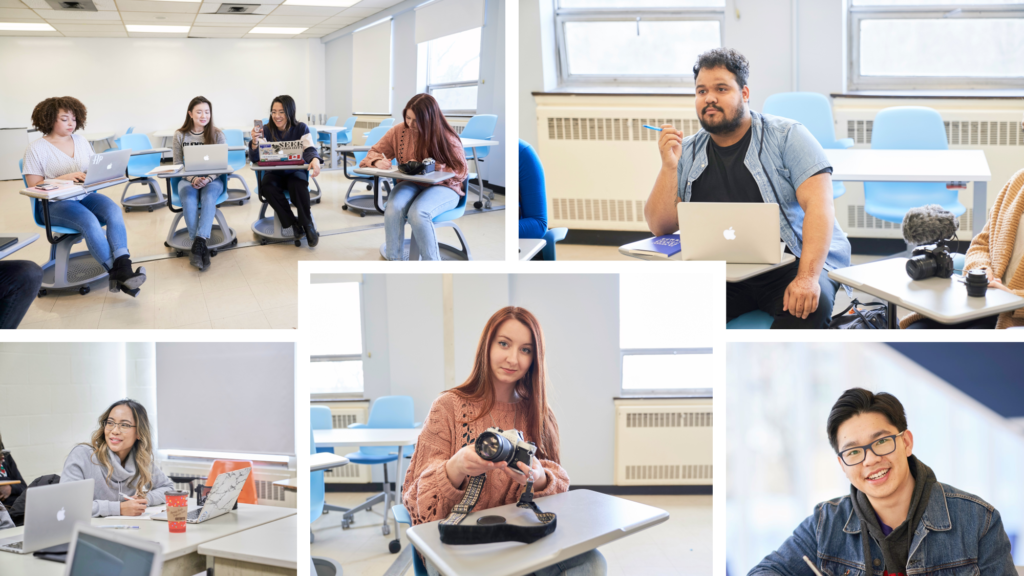 « It means a lot to be recognized for my academic efforts. I do not come from a wealthy background and any financial help is very meaningful to me, and it feels especially rewarding when it’s as a result of my hard work. This makes my and my family’s life so much easier by not having to worry about how to pay for school for at least one semester, as it is letting me focus on my education and allows us more time to save money for the following semester. Thank you again, there is no comparable feeling to being recognized for your hard work. This award only increases my motivation to continue to be a top student and strive for academic success ».
Ksenya Tereshchenko, Encouragement Bursary for Psychology Glendon

« I want to say a thank you from the bottom of my heart for helping hundreds of students like me who with the help of your scholarship were able to pursue a post-secondary education. I must say that your award was like a lottery ticket for me. Throughout my life, I was always determined to help people around me and change this environment for better. Yet, I always understood that in order to help my native country, Ukraine, I needed a higher education. Therefore, moving to Canada was the only chance to achieve my goal. And, there I was in grade 12, a graduate announced as the best international student, a graduate with the second highest GPA in the school, a graduate with numerous awards in sports and academics, with an accepted early offer of admission from the school I had for my goal to go to, York University, Glendon College. Yet, at that moment I knew that all these achievements will count for nothing If I don’t find the financial means to pay for my education. Thus, the only person that could help me out in this situation was you. You gave me the chance that I would never have, and I am truly thankful to you for this ».
Rezo Pkhakadze, the Ethel Harris Scholarship 2019-2020