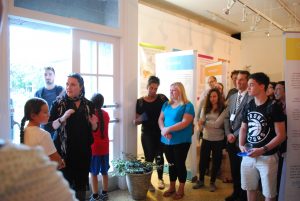 Maya Chacaby, Anishinaabemowin Instructor, at the opening of the Canadian Language Museum. Principal Ipperciel is on the right.

The Canadian Language Museum (CLM) was founded in 2011 to promote an appreciation Canada’s rich language heritage: over 60 Indigenous languages, the official languages of French and English, and the many other languages brought to this country by immigrants from around the world.  The CLM’s exhibits explore important language issues such as bilingualism, multilingualism, and language endangerment, preservation and revitalization.

The CLM operated as a museum without walls for five years, creating bilingual travelling exhibits that toured from St. John’s to Victoria. The exhibits have been shown in universities, high schools, elementary schools, libraries, community centres, galleries and museums.  On September 19, 2016, the Canadian Language Museum celebrated its move into its new exhibit space in Glendon Gallery. 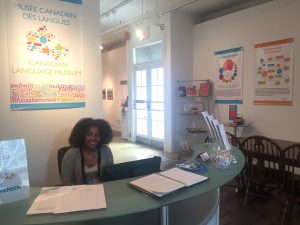 Maya Chacaby, Anishinaabemowin Instructor, at the opening of the Canadian Language Museum. Principal Ipperciel is on the right.

With a home at Glendon College, the CLM has been able to expand its activities, attract visitors to campus and actively engage with Glendon’s faculty and students. Students in Glendon’s Linguistics club have met regularly in the gallery space and volunteer to help with Museum programs. Students in the Translation program assist with the translation of the Museum’s bilingual exhibits. Groups of students from York’s Keele campus have come for tours of the Museums exhibits and to attend special events.  Next semester, three students in Glendon’s Public History course will have a placement at the CLM, to create a video investigating the retention of Indigenous languages in urban Toronto.

The museum’s exhibits continue to tour widely and the exhibits in the gallery change regularly.  The exhibit Le français au Canada will be on display in November and December 2017. We have a special photo and video exhibit opening in February 2018 from the award-winning Newfoundland artist Marlene Creates: A Newfoundland Treasury of Terms for Ice and Snow.

You can find information about our exhibits, our hours, and what is being shown in Glendon Gallery and at touring venues on our website: languagemuseum.ca | museedeslangues.ca