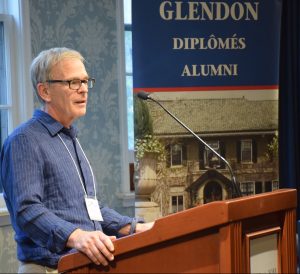 Indigenous culture and language are woven into the Canadian fabric, and play an important role here at Glendon. We have a forward-looking linguistics program that offers insight into indigenous matters such as language endangerment, plus weekly drumming circles and drum making workshops. These activities reflect and enhance our commitment to multiculturalism, multinationalism and internationalisation.

So we want to thank those who have helped advance this commitment by contributing to the Glendon Alumni Fund for Indigenous Students. You are now partners in our mission to better support indigenous students, faculty and staff on campus. To highlight the impact of your giving, we want to share the story of how a donor, like you, brought forward the idea for this important new bursary.

James Daw, BA’72, was a high school senior in small-town Ontario when his aunt joined him for a tour Glendon, York and Canada’s only bilingual university campus. “It was like coming to another village with the added benefit of being surrounded by francophones from Quebec and northern Ontario,” he remembers.

Almost 50 years later, his fond memories of Glendon inspired Daw to pay his experience forward. Friends had invited him to help plan a homecoming event with the Canada @ 150 theme. They agreed they should invite an Indigenous speaker, but failed to attract one. So the former Toronto Star columnist and certified financial planner proposed a lasting legacy instead.

The result was the Glendon Alumni Fund for Indigenous Students, which was unveiled at the daylong homecoming event in September 2017. Daw was on hand to thank the Friends of Glendon charity for its pacesetting $10,000 donation and he invited other alumni to join in pledging their support. Now valued at more than $32,000, the endowment will support Indigenous students in perpetuity, with only the investment income awarded annually.

The bursary is a direct reflection of York University President Rhonda Lenton’s commitment to accessibility and attracting more mature students, Indigenous Canadians, racialized people, people with disabilities, members of the queer and transgender communities and citizens of the world.

“Canada has a rich and diverse history,” says Daw. “It’s not only fitting for Glendon to offer an award to attract and support Indigenous students. It will make our campus even more interesting and fulfilling for all students.”

Thank you again to our alumni and friends for being a vital partner in our indigenous students’ success. Your gift has not only given our students the financial support they need to excel, but it also empowers them to achieve their academic and life goals.