From a high school dropout, to a war veteran, to professor and finally Principal of Glendon College, the late Albert Tucker’s career has been unconventional to say the least.

After dropping out of high school to help his widowed mother, he worked for some years in a clerical job and served with the RCAF ground crew in the Second World War. When he returned, he then took advantage of the educational opportunities offered to him by finally completing high school and then going on to study history at the University of Toronto. 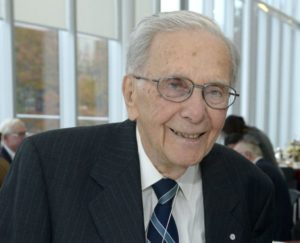 But he didn’t stop there. He eventually went on to pursue a PhD in History at Harvard University and was later recruited to teach history at York University’s Glendon College, working his way up to become Principal of the College.

As Principal of Glendon College, Albert developed an immense affection for the bright young students on campus. It’s no surprise that his generous annual support in life, as well as in his passing, he bequeathed a generous amount of money to support student awards, The John W. Holmes Memorial Lecture, and the activities of the Department of History.

“Albert was a beloved and revered member of the Glendon and Keele communities, and his legacy will provide lasting support to the programmes and people he valued,” says colleague, Michiel Horn, Professor Emeritus of History at Glendon.

“Like many visionaries, Albert possessed the rare ability to see beyond the apparent constraints of the status quo and to summon a new reality into existence that reflected his values,” says Mark Jurdjevic, Professor and Chair, Department of History at Glendon.

For example, as an undergraduate, Albert was impressed and inspired by the degree to which the Harvard history department brought the larger world to its undergraduates, offering them contact with a wide variety of influential scholars in different disciplines. He decided that Glendon history undergraduates should have the same opportunity and endowed the department with annual funds to invite visiting speakers.

“As a result of Albert’s vision of a dynamic learning environment, Glendon history undergraduates meet a wide variety of intellectuals putting their history expertise to work in innovative ways within and beyond the academy,” Prof. Jurdjevic said.

One of the beneficiaries of Albert’s generosity, Virginia Grimaldi says she would not have been able to complete her studies without having received the critical support from the Albert Tucker Estate.

“Being from a working-class family, being a single-mother, and being someone who has always struggled financially, attaining a PhD in History has had me quite stressed out at times, even contemplating whether I can afford to continue,” she said. “But this award not only made possible the first wave of primary source research, but in doing so, I now have a good chunk of what I need and I have been able to get working during this global pandemic.”

“I struggled a lot when I first started university, as my early grades probably show. Since then, I’ve worked hard to turn things around, and receiving the award was an amazing feeling of recognition and validation,” he says.

“I am incredibly grateful to the late Albert Tucker and York University for giving me the sense that all of this was worth it, and for giving others the same feeling in the past and future.”