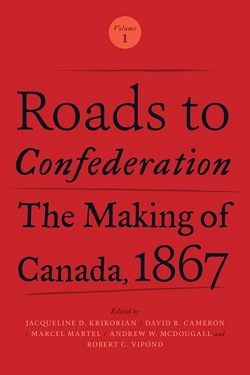 Professors from the Departments of History and Political Science at York University extend Canada’s 150 years old celebrations by launching two collective scholarly works on Canadian Confederation. These books are the result of a series of projects to mark Canada’s 150th anniversary, which were made possible through the leadership of history professor David Koffman and the support of his colleagues and administrative staff in the Department of History and the 150CAN@YORK committee.

Globalizing Confederation: Canada and the World in 1867 was edited by Jacqueline Krikorian, Marcel Martel and Adrian Shubert. The first is a professor of political science and law and society, the other two are professors in the Department of History. This anthology is the result of a workshop co-sponsored by the Department of History and the Avie Bennett Historica Canada Chair in Canadian History. The workshop brought together 16 scholars from Australia, Germany, Belgium, Canada, Chile, Spain, the United States, and Ireland to present papers on how people, nations and governments understood the issues involved in the union of the North American colonies of the British Empire in 1867.

The book contains scholarly work by several members of the York community, including Roberto Perin, who presents the perspective of Vatican; Alban Bargain-Villeger, who has examined the perspective of France; Willie Jenkins, who examines the Fenians and Confederation; Gabrielle Slowey, who analyzes the non-recognition of Indigenous people’s rights; and Jacqueline Krikorian and David Cameron, who write a joint analysis of American perspectives on the Confederation. 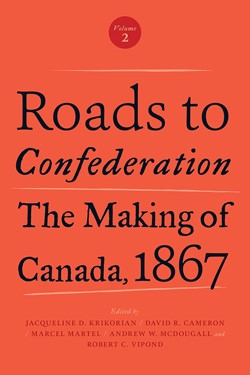 For their second collaboration, Professors Krikorian and Martel joined David Cameron, Andrew McDougall and Robert Vipond of the University of Toronto (U of T) to prepare Roads to Confederation: The Making of Canada. This two-volume anthology includes two original documents and 38 selections published over a period of 145 years.

“The publishers wanted to bring together the best research on the 1867 project, while at the same time pushing the traditional boundaries of this field of study by introducing scholarly work on people and communities that is largely overlooked in books on Confederation,” says Martel.

Both volumes of Vers la Confédération contain scholarly work on the lack of recognition of the rights of Indigenous people. The book is published in English by the University of Toronto Press and in French by Les Presses de l’Université Laval. 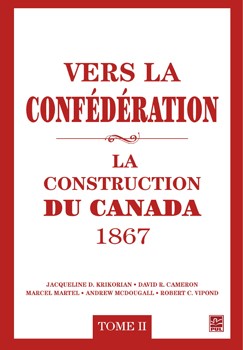 Cover of one of the two volumes of the French edition

” The drafting team wanted these documents to be available in both English and French, because in the past, the views of these communities about 1867 have been different, explains Professor Krikorian. Previous research has shown that English-speaking researchers rarely cite French-language documents in their publications on this issue. ”

In a first effort to remedy this situation, the book offers 29 selections that have never been translated into French or English. Some of these translations are the result of the Advanced Translation Project/Project Management course at York’s Glendon campus under the supervision of Professor Lyse Hébert.

The preface is signed Rhonda L. Lenton, President and Vice-Chancellor of York University, Mamdouh Shoukri, Professor and President Emeritus of York University, and Meric S. Gertler, President of U of T. The initiative was generously supported by the Canada150 Funds from York University and U of T, the Robarts Centre, York’s Department of Political Science, U of T’s Department of Political Science, York’s Liberal Arts and Professional Studies faculty, and the Avie Bennett Historica Canada Chair in Canadian History.

View all posts by bismail