Congratulations to the winners of the 2019-2020 Student Engagement Awards 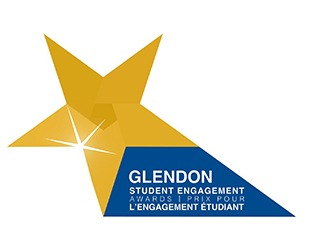 Glendon Campus is proud to announce the winners of the 2019-2020 Student Engagement Awards and to celebrate the outstanding contributions that these students have made to the Glendon community.

This award was created in memory of Margaret Wallace, Director of the Glendon Athletic Club, who passed away in 2012. The Margaret Wallace Leadership Award has been created to benefit an outstanding student leader, with preference given to a student active in the Glendon sport community.

Awarded to a graduating student who has been an exceptional leader, one who has made a consistent and valuable contribution to the community at Glendon. In celebration of building community, consideration is given to the level of equity, integrity and caring that was demonstrated in the recipient’s leadership and to the positive impact this has made.

Awarded in recognition of the achievements of committed students who have had a positive impact at Glendon by generously dedicating their time and talents in at least one of the following areas: residence life, community building, peer mentorship, athletics, creative arts, or university governance.

Awarded in recognition of the contributions made by a Glendon student who has recently become involved in student activities and demonstrates commitment and leadership potential.

Congratulations to this year’s recipients: Ana Kraljevic and Kelly Akerman!

The Prix Molière is awarded annually to a student whose outstanding achievements in theatre at Glendon significantly contribute to the cultural vitality of the campus community.

The Robert Wallace Award is given annually to a Glendon student demonstrating a strong record of involvement in, and positive contribution to Theatre Glendon, while maintaining satisfactory progress in his/her studies.

Congratulations to this year’s recipients, Allison Holden and Vincenzo Sansone!

Awarded to a returning Glendon student for outstanding contributions to the Glendon Athletic and Recreation program in terms of organization, leadership and program promotion.

Awarded to a Glendon student who promoted Glendon sports activities at the local and/or inter-college level. The candidates must have a minimum 5.50 grade point average and be nominated by members of the Glendon sports community.

Congratulations to this year’s recipients: Catherina Blair and Tamara Donnelly!