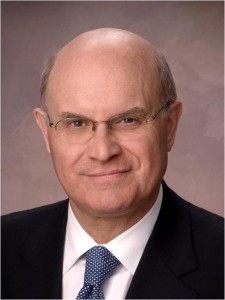 One of York University’s most illustrious alumni from Glendon, David Collenette (BA ’69, MA ’04) was a member of the Canadian House of Commons for more than 20 years. Serving under former prime ministers Pierre Trudeau, John Turner, and Jean Chrétien, he was minister of state-multiculturalism, national defense, veterans affairs, transport, and crown corporations. As such, David Collenette left a deep imprint on Canada’s history.

Among many of his accomplishments, David Collenette authored a major policy paper that charted a course for Canadian transportation policy over a decade, initiated legislative changes, and oversaw Canada’s response to the Sept. 11 terrorist attacks in the United States. As parliamentary secretary to the House leader during the constitutional debates of the early 1980s, David Collenette was assigned to Westminister to represent Canada’s interests.

Since retiring from politics in 2004, David Collenette has worked as strategic counsel for organizations in public affairs, transportation and infrastructure, information technology, and defence and security. He was a distinguished fellow at Glendon from 2004 to 2009. He has been a member of the Glendon School of Public and International Affairs Advisory Committee since 2007.