Glendon scholars are recognized for their dedication to highlighting important social issues and understanding their relevance to contemporary society. 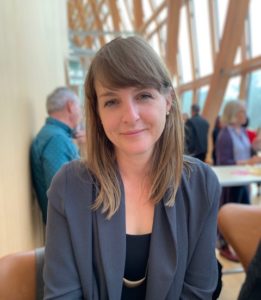 Dr. Emily Laxer, assistant professor of sociology at Glendon, is the 2020 recipient of the Canadian Sociological Association’s “John Porter Award” in recognition of her book Unveiling the Nation: The Politics of Secularism in France and Quebec, published by McGill-Queen’s University Press. The “John Porter Award” is the association’s most prestigious book prize.

The award recognizes Unveiling the Nation for its outstanding scholarly contribution to “the advancement of sociological knowledge in Canada.”

The Association praises Unveiling the Nation for its “topical content, in-depth analysis, and quality research,” and asserts that the book will make “important sociological and political contributions […] to both academics and to lay Canadian audiences.” 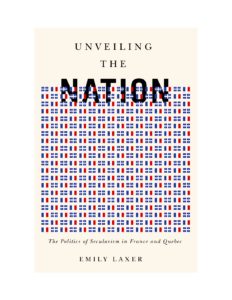 Engaging a widespread readership on political themes critical to understanding contemporary Canada and beyond, the relevance of Unveiling the Nation to this current political moment is undeniable.

Unveiling the Nation outlines the politics of religious diversity, political responses to the alleged ‘threat’ of Islamic ‘radicalism,’ and the role of populist and nationalist movements in circumscribing the boundaries of nationhood.  In its analysis of these key socio-political topics, the book details Québec’s ongoing religious signs debate, which in 2019 produced Bill 21 – a law prohibiting the display of religious signs among public sector employees in positions of authority.

Laxer also situates this analysis in comparison with similar debates in France. Through candid interviews with politicians and activists in that setting, she reveals the influence of populist values, institutions, law, and colonial histories on those debates.

Beyond discussions of French and Québécois politics, Laxer’s award-winning book has implications for current debates over facial coverings in Canada, and the effect these have on minorities’ inclusion and exclusion. The questions raised in Unveiling the Nation about governments mandating what people wear on their bodies are highly relevant to current legislative responses to COVID-19, like the decision of Toronto City Council to make face masks mandatory in indoor public spaces to combat the spread of the virus.

Public support for governments to mandate mask-wearing in this way reveals what Laxer calls a “crucial irony:” that Canadians are “comfortable wielding the levers of state power to require facial coverings in the name of public health and safety,” but remain uncomfortable with certain Islamic coverings in certain spaces and institutions.

Laxer affirms the need for “research […] to better understand the politic[s] […] that enable such contradictory measures to be rendered legitimate in the eyes of the Canadian public.”

Glendon’s Associate Principal, Research and Graduate Studies, Colin Coates, notes that, “Laxer’s publication is a significant contribution to our understanding of the debates around the secular state in Canada and France, and it illustrates the benefits of comparative research.”

Thanks to Dr. Emily Laxer’s scholarly research in her prize-winning book Unveiling the Nation, we can begin to apply her findings to understand current political events in Canada and beyond.

The Office of Research and Innovation congratulates Dr. Emily Laxer on her outstanding achievement and looks forward to supporting her future research endeavours – bravo!

View all posts by anyamoss