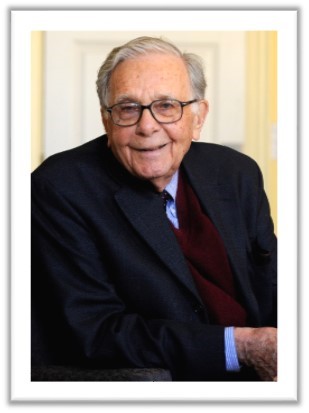 Albert Victor Tucker (1923-2017), the second principal of Glendon College and University Professor Emeritus of York University, died of a heart attack at his home on Shaftesbury Avenue in Toronto on Wednesday, October 25, in his 94th year.

Born in East Toronto, he dropped out of school to help his widowed mother and worked for some years in a clerical job in Toronto. During the Second World War he served with RCAF ground crew in Britain, France and the Low Countries, then took advantage of the educational opportunities this afforded him. He completed secondary school and entered the University of Toronto to study history. Upon completing his M.A., he took a Ph.D. in British history at Harvard University. He taught briefly at the University of Illinois in Urbana before joining the faculty of the University of Western Ontario, where he taught until 1966, the year Dean of Arts John T. Saywell recruited him to become a member of the York University History department.

The first principal of Glendon, Escott Reid, and the head of the History department, Edgar McInnis, persuaded Tucker to stay at Glendon instead of moving with most of the historians to the new campus at Keele and Steeles. He succeeded McInnis in 1968 and Reid at the end of 1969, continuing as head of History until 1973 while serving as principal until 1975.

Tucker’s early scholarly work was in nineteenth-century British military history, but he soon expanded his interests, and 1972 saw the appearance of his book A History of English Civilization. His interests shifted to Canadian business history, leading to the publication of Steam into Wilderness: Ontario Northland Railway 1902-1962 (1978). He then prepared a history of Labatt’s Breweries, but internal corporate politics blocked its publication. He taught at Glendon College and in the graduate department of History, as well as in the joint York-U of T program in Victorian Studies, until his retirement in 1993. In 1988 he was appointed University Professor in recognition of his stellar services to York. From 1997 to 2007 he served as president of The York University Retirees’ Association.

Tucker never married; he is survived by a niece, Constance Dykes, and a nephew, John Tucker, grand-nieces and grand-nephews. He is remembered as an inspiring teacher, a helpful colleague, and a gentle human being who gave generously of his time and money to York and Glendon. He established scholarships, made donations to the Leslie Frost Library, and initiated and funded the annual John Holmes Memorial Lecture at Glendon as well the Albert Tucker Visiting Speakers’ Series of the Glendon History department.

To RSVP, please fill out the form at the bottom of this page.