A Glendon Campus Student is Awarded by Fondation franco-ontarienne 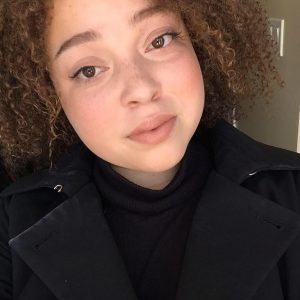 During the event held in the Barrie area, Fondation franco-ontarienne unveiled and recognized three Southern Ontario recipients for the following categories: “Community Engagement”, “Youth” and “Professional”.

Laureate in the “Youth” category, Keesha Nurse stood out for her commitment and the work she does to cultivate strong ties and a sense of belonging with the Francophone community. Although her commitment towards La Francophonie began well before her arrival at the postsecondary level, it is the strength of her work at Glendon Campus that was highlighted.

A proud Franco-Ontarian from Toronto, Keesha passionately and actively shares her love of the French language and Francophone culture with others at Glendon, helping students increase their opportunities to express themselves, improve their oral communication in French, and discover La Francophonie’s diversity and the ways it can enrich their personal and professional lives.

Her involvement in La Francophonie at Glendon includes:

“I would like to congratulate and thank Keesha for her involvement in shaping and enriching Glendon’s bilingual campus. Her initiatives have given Francophone and Francophile students a voice, and increased interest towards cultural programming that reflects a vibrant plural Francophonie,” says the Campus Glendon Principal, Donald Ipperciel.

“Keesha is one of the outstanding students which the Glendon academic community is privileged to teach, to interact with and to count among the Glendon family. She is a model of Francophone success for the community and especially for the young people who will succeed her,” he added.

The Campus Glendon would like to extend its congratulations to the two other recipients who were honored last Saturday: Ms. Lauraine Côté in the Community Engagement category and Ms. Jo-Anne David in the Professional category.